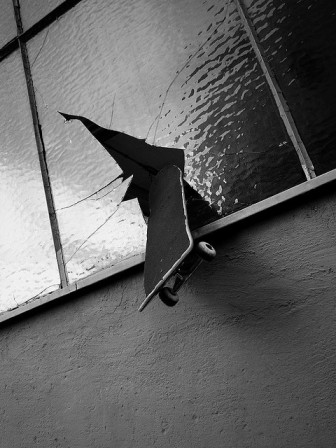 Skateboarding is a really fun activity, but it is something that can also be really frustrating. There have been times that I’ve seen people (myself included) turn into complete maniacs because of the overwhelming frustration that they are feeling because of their skateboard. People will throw their board everywhere, scream and yell, and get angry at people for getting in their way over something that they love. I was at a skate park the other day watching someone act like this, and I asked myself, “why would someone that skates everyday and has a passionate love for skateboarding act in such a way that makes them look like a maniac?”

Frustration is a common emotion in life that usually comes from an unfulfilled or unrealistic expectation. A skateboarder that starts to throw their board and yell at kids that get in their way, does so because they expect to land all their tricks immediately and to skate in peace without anybody ever getting in their way, which is obviously an unrealistic expectation that would almost never happen. They would never say out loud that this is what they expect to happen at a skate park, but their reactions show it. People get frustrated when their car breaks down because they expect it to be indestructible, people get frustrated with people because for some reason they expect them to be perfect and to never do anything wrong. To live a peaceful life, we need to be sure to have realistic expectations, a skateboarder should expect to have days where he or she can’t land anything and should expect kids to get in their way at a skate park.

It is obvious that the world is imperfect, but for some reason, our expectations say something different. People will sometimes expect perfection so much that they will start to act like maniacs because they don’t know what to do with themselves when they are faced with the reality that things are not perfect. These patterns in humanity make it obvious that there is something wrong or fallen about our world, and every person desperately seeks or expects it to be different. For reasons that we don’t always understand, Adam and Eve in the Garden of Eden brought imperfection into the world, and since we are all descendants of them, we inherited this imperfection. Whether we see it in biblical terms or not, all of humanity knows that the current state of affairs is not perfect and that we long for a world that is. Our expectations and frustrations portray this clearly. Part of the good news of following Christ is that there will come a day when we can expect perfection, as it says in Revelation 21:4, “He will wipe away every tear from their eyes, and death shall be no more, neither shall there be mourning, nor crying, nor pain anymore, for the former things have passed away.” A perfect world is coming for those that want to be a part of it by knowing and following Christ (Matt. 7:21-23), but in the meantime, we can expect to have imperfect days where we can’t land our tricks, people to annoy us, and things to go wrong. Jesus, and a realistic expectation is the remedy for the unrealistic ones that cause us to act like maniacs or expect things from ourselves and others that don’t make any sense.

The definition of insanity is doing the same thing over and over again and expecting a different result. Unrealistic expectations put us in this category. How many times have we gone skating and subconsciously expected to land everything, only to be let down and become angry? Or expected imperfect people to never do anything to upset us? That is insanity. Expecting perfection in an imperfect world classifies us as insane. I hope we can be aware when are expectations are unrealistic and live a more peaceful life that is steeped in reality.

If you expect things to go wrong and to not always go according to plan, would it change the way you responded when things didn’t go the way you wanted them too? Would you be less frustrated and less upset?

Does being aware of our own imperfections, as well as those of others and of the world help to maintain a sense of peace when we would normally get upset?

C.S. Lewis said, “If I find myself with desires that nothing in this world can satisfy, my only conclusion would be that I must be made for a different world.” How do you think this connects with what we are talking about here?