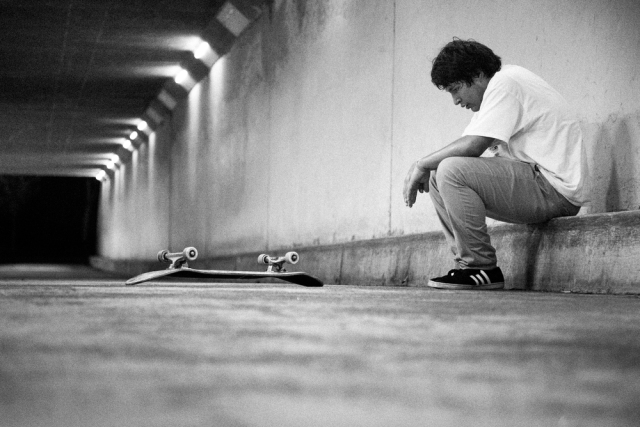 Why is skateboarding so frustrating? How often do we see people yelling and throwing their skateboards around at a skate park? I love it, it is my greatest passion, but it also frustrates me to no end. Nothing aggravates me and tests my patience like skateboarding; but at the same time, nothing brings me more joy and is more life giving than skateboarding. skating with friends, pushing myself to new levels, filming and making edits, the energy and hype at the spot when people are landing tricks; there is nothing like it. So why does something I love so much have its moments that make me frustrated and cause me to feel like a maniac? The truth is because I love it, for if I didn’t, it wouldn’t matter to me if I ever landed anything, got any better, or got that clip I have been wanting. Frustration reveals passion and love. My wife and I deal with the same thing with each other. We fight and get flustered with each other more than any other person, and it is because we love each other more than any other person. If I never became frustrated when I skated or with my wife, then that is an indicator that I don’t really care.

God responds in very similar ways with his passion… people. In Jeremiah 31:3 He says, “I have loved you with an everlasting love.” To love anything to that degree means there are going to be times of frustration, and we see this many times in the Bible. For instance, in the Old Testament when Israel refuses to stop worshipping idols. His people are carving images out of wood and expecting these creations of their own hands to care for their well being. When God has done so many things to prove to them that He is their God who loves them and takes care of all their needs. He sends prophet after prophet to help them understand the futility of their actions, but nothing seems to get through to them.

Jesus, being the most loving, patient, kind person that ever walked the earth, also had moments of frustration with people. One example is when he walks into the temple, and is grieved that His people have made it into a place of business. He begins overturning tables and whipping people and shouts, “It is written, ‘My house shall be a house of prayer,’ but you have made it a den of thieves!” Even the disciples, the people we would say had the most intimate relationship with Him, experienced a frustrated Jesus. In Luke 9:40 a man brings his demon possessed son to Jesus after his disciples failed to cast him out, and Jesus says to them, “O faithless and twisted generation, how long am I to be with you and bear with you?” Not what we would expect from the all loving savior of the world. Then there are the Pharisees and the religious leaders that Jesus reserved his strongest frustrations for, calling them names such as: whitewashed tombs, hypocrites, blind guides, and the list goes on. They are often viewed as the people that Jesus was against, due to the fact they were always trying to catch him slipping so they could build a case against Him and have him killed. They were the leaders of the current status quo that Jesus came to challenge, and they hated him for it. They were so entrenched in their ways that they could not see any other perspectives, and were unable to feel compassion for people. They had an appearance of having it all together – saying, doing, and believing all the right things, but it was all a tactic for power and political gain. The strong language that the pharisees received from Jesus is not because He couldn’t stand them and needed to put them in their place, but because He loved them dearly and wanted what was best for them. As we see in Matthew 23:37 when Jesus comes to a viewpoint of the city of Jerusalem and says, “O Jerusalem, Jerusalem, the city that kills the prophets and stones those who are sent to it. How often I have longed to gather your children together, as a hen gathers her chicks under her wings, but you were not willing.” All the harshness and name calling came out of a deep love that had become frustrated because he wanted better for them.

I have often wondered after I have a meltdown from skating, “why does skateboarding make me so crazy?” And the answer is of course, because I love it and it gives me life. Everything we hold with high value, that is life giving to us, makes us a little crazy at times. The frustration is the test that defines how committed we are. Many people get frustrated with their marriages and get divorced, or with skateboarding and quit, or with Jesus and stop believing. The people that are really committed work through the frustrations and allow the passion to grow and take root, to the point where quitting would feel like severing a limb. Eric Koston (legendary pro skater) said, “skateboarding feels so a part of me, that for me to quit would be like cutting off my arm.” That is a passion that has withstood many frustrated tests. As when God says to Israel in the same breath that He is expressing His frustrations with their idolatry, “Can a woman forget her nursing child, And not have compassion on the son of her womb? Surely they may forget, Yet I will not forget you. See, I have inscribed you on the palms of my hands, your walls are ever before me” (Isaiah 49:15-16). No matter how frustrated He gets with us, He is never going to give up on us. The frustration is the indicator of strong, deeply rooted love. Without those frustrated moments, it probably means we don’t really care, or we could take it or leave it. But God’s love for us is clearly not one of, “I could take it or leave it.” His frustrations with people in the scriptures show us how deep His love is for humanity, and His love for us is the example of how we love others. Their is a healthy, normal amount of frustration that comes when we really love someone or something, but it is important to remember why we are becoming frustrated so we don’t end up doing something out of anger that we will regret.

When you become frustrated with skateboarding because you are not skating how you feel like you should be, either you’re having an off day, or “last week I was landing this trick every try and now I can even do it.” How would it change you’re reaction if you kept in mind that the reason I am getting frustrated is because I love skateboarding so much?

If you have ever had a significant other or a best friend that frustrated you for some reason, how would the reaction change if you kept in mind that it is because you care so much that you are becoming frustrated?

How can we have a healthy amount of frustration with the things we love the most and not become mean or angry to the point where we do something we regret?