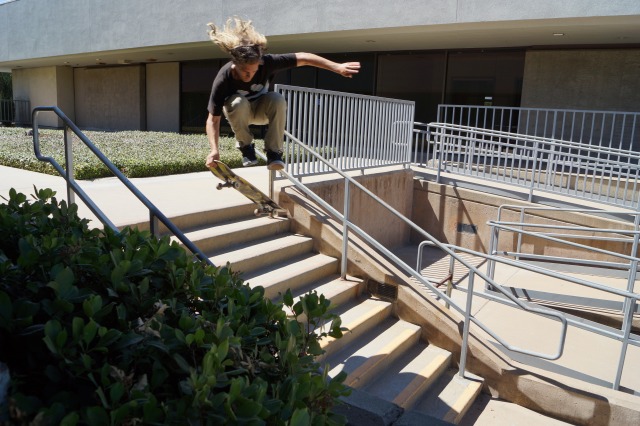 Craig Stecyk, the very first prominent writer of skateboarding said, “Skaters by their very nature are urban guerillas: they make everyday use of the useless artifacts of the technological burden, and employ the handiwork of the government/corporate structure in a thousand ways that the original architects could never dream of.” Skateboarding, by it’s very nature redefines and gives new meaning to things that would otherwise have little significance. A set of stairs to the average person has a very boring and mundane purpose, it just helps them get from point A to point B, but when a skateboarder comes across a set of stairs, the stairs takes on a whole new meaning, one that is full of life and artistic expression. The set of stairs becomes a playground, a place where creative ideas flourish and possibilities become endless. Skateboarding gives architecture new meaning and new life.

Paul the apostle says in 2 Corinthians 5:17, “If anyone is in Christ, he is a new creation; the old has passed away, and behold, all things have become new.” Just as the skateboarder sees a piece of architecture and redefines it and gives it new meaning and new life, so does Christ when he comes to humanity and begins to work in them. Paul also says in Ephesians 2:10, “We are Christ’s workmanship, created in Him for good works, which God prepared beforehand that we should walk in them.” The word for “workmanship” in the original language is the greek word poema, which is the word we get for poem. The word implies that we are something of an art project, continually being made into something more beautiful. When Christ begins to work in someone that person becomes an endless work of art, always increasing in beauty, potential, and capabilities. God took Moses, a man with a great sense of inadequacy who was afraid to speak to people because he was “slow of speech,” and made him into a great leader that became the instrument that lead the Israelites out of slavery. His life was given new meaning and purpose and became the greatest prophet of God that ever lived. To push God away, is to limit the possibilities of the impact we can potentially make on this earth. As Jesus says in John 15:4-5, “Abide in me, and I in you. As the branch cannot bear fruit by itself, unless it abides in the vine, neither can you, unless you abide in me… For apart from me you can do nothing.” Architecture needs a skateboarder to realize it’s true potential, and people need Jesus, the great God and savior, to realize their true potential.

What does it look like to become a “new creation in Christ” in your own life as is mentioned in 2 Corinthians 5:17?

How does being Christ’s “workmanship,” his endless work of art, affect how we view ourselves and others? Does God’s creative nature change how we see Him and others?

Are there any ways that you are limiting what God can do and wants to do in your life? Are you holding your self back at all from becoming a new creation in Him and becoming His workmanship?