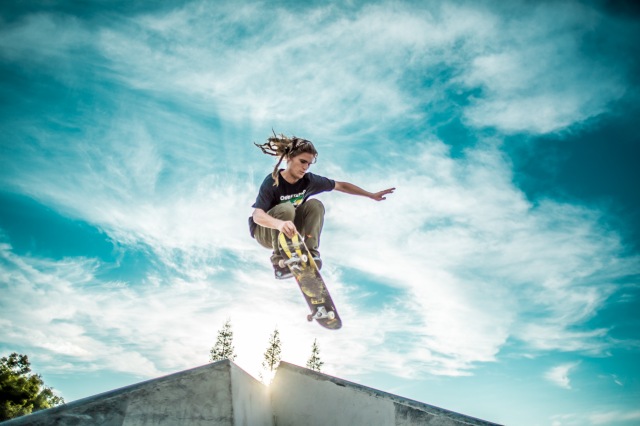 The other day I was at a skate park cruising around, sticking to what was easy and tricks that I knew I wouldn’t get hurt on, and after about 15 or 20 minutes of this I realized how incredibly boring skating is when I do this. I never really noticed how much more I enjoy skateboarding when I am really pushing myself and taking risks that could get me hurt. Where is the thrill and feeling of accomplishment without the risk of painful failure?

The other day I heard a quote from Bruce Lee that said, “Do not pray for an easy life… pray for the strength to endure a hard one.” When I first heard this quote, I thought, “wow, another tough guy quote,” one of those things that guys say a lot just to sound cool or strong, but in reality don’t really live by it. At the time when I heard it, I was going through a tough time in my life that caused me to question almost everything in regards to my Christian faith. Since I was 18, fresh out of the party scene, I believed that God had good plans for my life, and that the Christian life is always better than anything contrary. So much so, that I began to pursue a life of Christian ministry that led to me getting a Bachelors degree in Biblical Studies, skating for a Christian based board company, spending 8 months in Florida with a skate and surf ministry, and writing blogs for the past 3 years that are meant to portray the goodness of God. With the way I lived my life, you would think I was completely sold on the Christian life and would never think of questioning it or living contrary to it. But when the morals of God, or the purpose we think he has us on, no longer seems to make any sense, it can get real tough to remain passionate about Christ. When life gets hard like this, quotes like the one above by Bruce Lee just sound like a bunch of meaningless words that only comes out of the mouths of people that have it easy. Giving our life over to God can make life hard, because when life gets chaotic or fuzzy, it’s only natural to blame Him for our problems and to feel like we made a mistake by putting Him in control of our lives. But the fact that some of the morals of Christianity are challenging, and that we don’t always know what God is doing with us or where he is leading us, makes serving Him much more fun and exciting. When life doesn’t seem to make any sense and then all the sudden the smoke begins to clear and God begins to reveal the purpose in all the apparent chaos in our lives, life becomes a thrill and a huge rush. A good example of this is Joseph in the book of Genesis – he gets sold by his brothers into slavery in Egypt, is falsely accused of sleeping with a noble’s wife and is sent to prison for many years, and then all the sudden he becomes Pharaoh’s second in command and ends up being the key figure in saving a big portion of the earth’s population from a huge famine. Joseph, reflecting on his life at the end of all this, says to his brothers, “As for you, you meant evil against me, but God meant it for good, to bring it about that many people should be kept alive, as they are today.” Serving God is hard and challenging because we don’t always know why He does the things that he does or why he lets us go through certain things, but when we all the sudden do see what he is up too…. what a thrill!

Every time we step foot on our boards, we can stick to what’s easy and be kind of bored, or we can challenge ourselves and try things that our hard and have a blast. Skateboarding is the most fun when we are pushing ourselves and taking risks, and in the same way, when we make Christ lord of our lives, life becomes a lot more risky and hard, but it also becomes a lot more fun and exciting. Without a Heavenly father guiding us and being with us, our lives have little sense of adventure, especially when things get tough and we have to suffer. Every good adventure and story has times when things go wrong that leave the viewer wondering, how are they going to make it out of this one? The excitement comes from things going wrong, and then finding a way out of it. That is what makes serving God so exciting, whenever life takes a crazy turn, we get to see God work it out for our favor. As Paul says in Romans 8:28, “We know that all things work together for good for those that love God.” To commit to Christ, is to commit to adventure and excitement, but in that also comes risk and times of Chaos and uncertainty, which only makes it O’ the more beautiful. It is the difficult things that produce the biggest reward and satisfaction, we know that from skateboarding. So if following Christ is difficult, it too will produce the biggest rewards and satisfaction.

Timothy Keller said, “if we obey God only when it makes sense, that is not obedience, but agreement.” Does life and following God always have to make logical sense in order to do the things that God expects from us?

If we took as much risk in our faith as we do on our skateboard, how would that affect our faith? Is there ever a time when hardship can be exciting instead of dreadful?