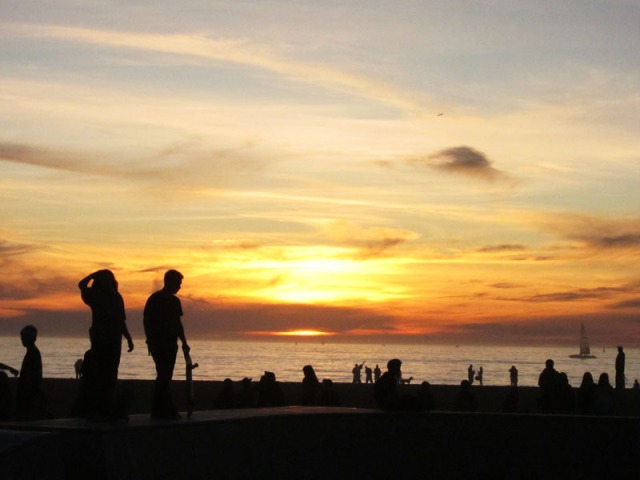 I was with some Camp Royal guys at Venice Beach skatepark the other day filming skate footage and an interview for a video promotion they have been working on. We got there at 7:00am to get some good lighting with the sunrise and also to beat the crowds. When we got there they wanted to film me setting up a new board near the boardwalk, and as I was sitting there with the camera man setting up my board, this guy Kaleb came up and started talking to us. First thing he said to us was, “hey sorry to interrupt, but I saw the camera and was wondering what was going on and was hoping to get on camera.” Kaleb definitely wasn’t a shy person. He hung out with us pretty much the whole time we were over there filming. He asked me if I was pro, what the purpose of this was, and what I was going to do with my old board. When I told him I would give him my old board his face lit up with excitement and said to me, ”aww thank you so much, I cracked my board the other day and needed a new one, I can’t wait to set this up!” As I sat there talking to him while I was setting up my new board he told me that he had been homeless on the beach for about a year. When I saw him he didn’t seem homeless, he had a clean sweatshirt on, his hair was cut pretty short, and it didn’t seem like it was too long ago that he had his last shower. I asked him about his family and he told me that his mom is in a convalescent home that can’t really do anything for him and that he has a sister that lives not to far from Venice beach but doesn’t want anything to do with him. And he told me that there was an older guy that’s a local at the skate park that gives him some work to do around his house in order for him to eat. As I sat there listening to his story I was shocked, for one: he didn’t look homeless, and two: he was one of the happiest, most genuine people I’ve ever met. His situation didn’t seem to affect his attitude or outlook on life at all.

Nehemiah 8:10 says, “Do not sorrow, for the joy of the LORD is your strength.” Kaleb was the perfect example of this, his joy and attitude wasn’t based on circumstance, but surpassed it. Kaleb could have easily been full of bitterness and blamed others for his situation, but he chose not too. I saw the joy of the Lord in Him, a joy that surpasses all human understanding, and that is what made my encounter with him such a highlight. Kaleb is an inspiration that no matter what happens to us in life, we can smile and have joy in our hearts, “For the joy of the Lord is our strength,” not our circumstances.